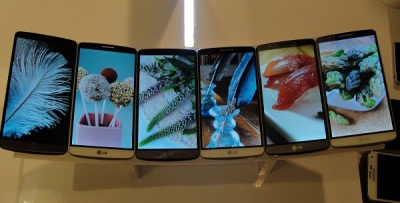 LG Electronic’s new G3 flagship smartphones are on display at a presser in San Francisco, California, May 27, 2014. Simultaneous introductory events were held in a half-dozen cities, LG saying they would hit US soil by September in deals with an array of telecom service carriers. The G3 has a 5.5-inch (14 centimeter) display with screen quality four times that of standard high-definition resolution and extensive battery life. Features crafted in to entice smartphone lovers includes ramped up camera capabilities that include advanced hardware; letting people take “selfies” with gestures, and laser-enhanced focusing. Along with touches such as curving the G3 to make it fit more naturally in a hand, LG overhauled the user interface to make it simpler. Among improvements is the ability to unlock a G3 by “knocking,” or using a series of finger taps, and a built-in virtual assistant of sorts referred to as Smart Notice. Smart Notice offers suggestions based on factors such as user behavior and location. AFP PHOTO GLENN CHAPMAN